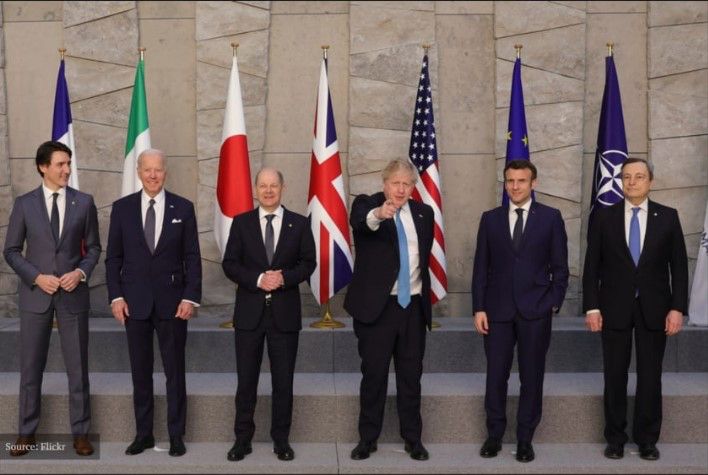 BERLIN: "Ukrainian entry into NATO is the brightest of all red lines for the Russian elite (not just Putin). In more than two and a half years of conversations with key Russian players, from knuckle-draggers in the dark recesses of the Kremlin to Putin's sharpest liberal critics, I have yet to find anyone who views Ukraine in NATO as anything other than a direct challenge to Russian interests."

-Memo from William Burns, US ambassador to Moscow to US Secretary of State Condoleeza Rice, April 2008, days after NATO announced that it would admit Ukraine as a member

"I don't know how this will end if you give (Ukraine) defensive capability but I know this: I will feel better because when my nation was needed to stand up to the garbage and to stand by freedom, I stood by freedom.They (the Ukrainians) may die, they may lose, but I'll tell you what. if somebody doesn't push back better, we're all gonna lose."

One cannot even begin to imagine what the Ukrainian people have been going through in the four months since the war began. But here are some numbers.

· The Kyiv School of Economics reports that the direct damage to Ukraine's infrastructure - including roads, airports, healthcare institutions and schools - had reached $103.9 billion as of 8 June.

· In 2020, Ukraine's GDP was $156 billion. So just the infrastructure loss amounts to 67 per cent of the country's GDP. One estimate suggests that as of late May, economic losses had reached the equivalent of five times GDP.

· 70 per cent of Ukraine's exports, which account for 44 per cent of its GDP, moved through its ports on the Black Sea and the Sea of Azar. These ports are now under Russian control and it is extremely unlikely that they will be back in Ukrainian hands in the foreseeable future.

· As things stand, Kyiv requires $5 billion of aid every month just to keep the government running. It may take up to $1 trillion to rebuild the country.

This is the state of affairs in just four months of war. What will be left of the country and its people if the war drags on for years, as it very well could?

Who will history hold responsible for all this misery and deaths and all these lives ruined for ever?

To believe that it will be Vladmir Putin would be to delude ourselves. This war has been coming for at least 14 years. It was inevitable. We need to look at why Putin invaded Ukraine.

The Russia-Ukraine relationship is a tangled web that dates back more than a thousand years, but both trace their origins to the medieval state of Kievan Rus, with its capital at Kyiv. Kyiv has an extremely important place in the way Russians see their own history. As does Ukraine. For instance, the fearsome Cossacks, referred to in so much of Russian arts and literature, from War And Peace to Eisenstein's Ivan The Terrible, were Ukrainian. They helped expand the czarist Russian empire.

Leonid Brezhnev, who headed the Soviet Union for 18 years from 1964 to 1982, was a Ukrainian. His predecessor Nikita Krushchev was a Russian who had been born in Ukraine and grown up there. In fact, the Russian-majority Crimea region was gifted to Ukraine by Krushchev in 1954, though it was only a redrawing of maps and changed nothing on the ground, because Ukraine was then part of the Soviet Union.

This backstory is necessary to understand the Russian connection to Ukraine, and what Ambassador Burns wrote, that he had not met a single Russian "who views Ukraine in NATO as anything other than a direct challenge to Russian interests".

Between the collapse of the Soviet Union in 1991, which led to Ukraine becoming an independent country, and the April 2008 NATO summit at Bucharest, Russia and Ukraine coexisted more or less peacefully. Ukraine had inherited a huge nuclear stockpile from the Soviets, some of which it destroyed and the rest it returned to Russia. The naval base of Sevastopol in Crimea, the home of the Soviet Union's Black Sea fleet was a bone of contention but Ukraine leased part of it to Russia till 2017 (extended later to 2042).

Putin came to power in 2000. By 2008, the NATO military alliance had expanded deep into eastern Europe-nearly all the former Warsaw Pact countries were now members. At its annual summit at Bucharest, NATO announced that it would make Ukraine a member. It could hardly have been unaware that Russia would feel threatened by this move. This was a cavalier disregard of Russia's views by NATO's decision makers, who possibly thought that the erstwhile superpower was now too weak to do anything about it.

The question then naturally arises: If the West thought Russia was a spent force, why extend NATO and station its military right up to its border?

At no point till then had any Western politician or media called Putin an imperialist or a psychopath, as he is routinely accused of being today. He had never uttered a single word about a Greater Russia or rebuilding the Soviet Union. He still has not, to this day.

But NATO's announcement triggered Putin. He had watched NATO expand, which all Russians believed to be a betrayal of trust by the West.

In 1990, the Soviet Union, which was on the verge of disintegrating, was given a verbal assurance by the US that NATO would not venture east of a newly unified Germany (the democratic west and the communist east). But there was never a written guarantee.

In 1991, then British prime minister John Major, asked about NATO expansion to the east, reportedly said: "Nothing of that sort will ever happen."

In 1993, when NATO was considering whether to take on Poland as a member, Yeltsin wrote to US president Bill Clinton that any further expansion of NATO breached what had been agreed upon. The US government asked the German foreign ministry to report on the complaint's merits. The German foreign minister's top aide replied in October 1993 that the complaint was formally wrong but he could understand "why Yeltsin thought that NATO had committed itself not to extend beyond its 1990 limits". NATO onboarded Poland.

So, technically the West had the freedom to expand NATO, but not morally. Strategic international policy does not have much to do with morality, but Russia felt betrayed.

Let's come back-or forward to 2008. Putin was enraged by NATO's Ukraine announcement. He emphasized-and he would do so numerous times ever since-that Ukraine joining NATO was totally unacceptable to Russia. Russia would not allow NATO forces and possibly nuclear warheads at its doorstep.

In his memo, Burns wrote that it was "hard to overstate the strategic consequences" of offering Ukraine NATO membership, which, he predicted, would "create fertile soil for Russian meddling in Crimea and eastern Ukraine".

Here is a theoretical analogy. How would the US and NATO have reacted if Russia announced that it was setting up military bases in Finland and Sweden, possibly with nuclear missile systems?

But the US did not halt. In January 2009, when Barack Obama took over as president, he gave the Ukraine portfolio to his vice-president Joe Biden. Biden had long been an advocate of Ukraine's NATO membership and super-hawkish towards Russia. He got to work with gusto.

President Joe Biden speaks during an interview with the Associated Press in the Oval Office of the White House, in Washington. AP

In February 2014, the US State Department and CIA managed to pull off what Biden had sought. A US-funded violent uprising, now referred to as the "maidan revolution", toppled the government of pro-Russia president Viktor Yanukovych. Led by far-right militia groups, the official reason for the insurrection was widespread government corruption. The funny thing is, all Ukrainian governments since then-including the current one of Volodymyr Zelensky-have remained deeply corrupt.

Putin reacted swiftly. For years, he had been saying that Ukraine joined NATO, Russia would take Crimea and the Russian-majority Donbas region in east Ukraine. In a lightning strike, Putin's army annexed Crimea and secured its naval base at Sevastopol. He also started funding the long-simmering separatist movement in the Donbas.

The newly elected US-backed government in Kyiv cracked down in the Donbas. In addition to its armed forces, it also let loose far-right neo-Nazi militia. Ukraine has a long history of the fascist movement and it still remains strong. The Donbas remained in a state of low-intensity civil war till Putin's invasion in February this year.

Ukraine also started to rapidly expand its military. NATO began a programme to train Ukrainian soldiers. On an average, 10,000 soldiers were trained every year.

In September 2014, the Minsk I agreement was signed between Russia and Ukraine, mediated by France and Germany, to end hostilities in the Donbas. They did not end, and the Ukrainian government and the separatists accused each other of ceasefire violations.