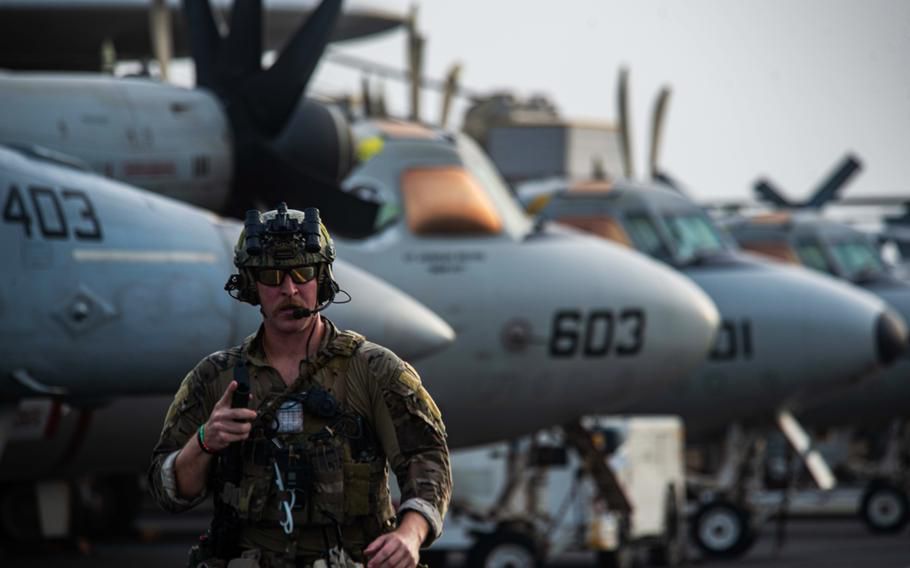 In this photo provided by the U.S. Navy, Explosive Ordnance Disposal Technician 3rd Class Ethan Tews walks across the flight deck of aircraft carrier USS Ronald Reagan to board an MH-60S SeaHawk helicopter to head to an oil tanker that was attacked off the coast of Oman in the Arabian Sea on Friday, July 30, 2021. An attack on an oil tanker linked to an Israeli billionaire killed two crew members off Oman in the Arabian Sea, authorities said Friday, marking the first fatalities after years of assaults targeting shipping in the region. (Quinton A. Lee/U.S. Navy)

DUBAI, United Arab Emirates — U.S. Navy explosive experts believe a "drone strike" targeted an oil tanker that came under attack off the coast of Oman in the Arabian Sea, killing two on board, the American military said Saturday.

The strike Thursday night on the oil tanker Mercer Street marks the first-known fatal attack after years of assaults on commercial shipping in the region linked to tensions with Iran over its tattered nuclear deal. While no one has claimed responsibility for the attack, Israeli officials alleged Tehran launched the drone strike.

While Iran did not directly acknowledge the attack, the strike comes as Tehran now appears poised to take an even tougher approach with the West as the country prepares to inaugurate a hard-line protégé of Supreme Leader Ayatollah Ali Khamenei as president.

The American nuclear-powered aircraft carrier USS Ronald Reagan and the guided missile destroyer USS Mitscher were escorting the Mercer Street as it headed to a safe port, the U.S. Navy's Mideast-based 5th Fleet said in a statement early Saturday.

"U.S. Navy explosives experts are aboard to ensure there is no additional danger to the crew, and are prepared to support an investigation into the attack," the 5th Fleet said. "Initial indications clearly point to a (drone)-style attack."

The 5th Fleet statement did not explain how it determined a drone caused the damage, although it described its explosive experts finding "clear visual evidence that an attack had occurred" aboard the Mercer Street. The U.S. military's Central Command did not immediately respond to a questions on the evidence.

The drone attack blasted a hole through the top of the oil tanker's bridge, where the captain and crew command the vessel, a U.S. official said. The official spoke on condition of anonymity as an investigation into the attack still was ongoing.

The Mercer Street is managed by London-based Zodiac Maritime, part of Israeli billionaire Eyal Ofer's Zodiac Group. The firm said the attack killed two crew members, one from the United Kingdom and the other from Romania. It did not name them, nor did it describe what happened in the assault. It said it believed no other crew members on board were harmed.

British maritime security firm Ambrey said the attack on Mercer Street had killed one of its team members on board the vessel.

The Mercer Street, empty of cargo, had been on its way from Dar es Salaam, Tanzania, to Fujairah, United Arab Emirates, at the time of the attack, Zodiac Maritime said. The attack targeted the tanker just northeast of the Omani island of Masirah, over 185 miles southeast of Oman's capital, Muscat. Oman's state-run news agency late Friday described the area as "beyond Omani regional waters" and said its forces responded to the tanker's mayday call.

Israeli officials, who spoke on condition of anonymity as they weren't authorized to talk to the media, blamed Tehran for the attack. They offered no evidence to support their claim.

Israeli Foreign Minister Yair Lapid tweeted late Friday that he spoke with British Foreign Secretary Dominic Raab about the "need to respond severely" to the attack, although he stopped short of directly blaming Iran.

"Iran is not just an Israeli problem, but an exporter of terrorism, destruction and instability that affects the whole world," Lapid wrote. "We can never remain silent in the face of Iranian terrorism, which also harms freedom of navigation."

Lapid spoke with U.S. Secretary of State Antony Blinken on Saturday. The State Department said the two diplomats "agreed to work with the United Kingdom, Romania and other international partners to investigate the facts, provide support and consider the appropriate next steps."

Other Israel-linked ships have been targeted in recent months as well amid a shadow war between the two nations, with Israeli officials blaming the Islamic Republic for the assaults.

Israel meanwhile has been suspected in a series of major attacks targeting Iran's nuclear program. Also, Iran saw its largest warship recently sink under mysterious circumstances in the nearby Gulf of Oman.

Thursday's attack comes amid heightened tensions over Iran's tattered nuclear deal and as negotiations over restoring the accord have stalled in Vienna. The series of ship attacks suspected to have been carried out by Iran began a year after then-President Donald Trump unilaterally withdrew America from the accord in 2018.

The attack on the Mercer Street also came the night after Blinken, speaking from Kuwait, warned Iran that talks in Vienna over the nuclear deal "cannot go on indefinitely."

This is the second time this month a ship tied to Ofer apparently has been targeted. In early July, the Liberian-flagged container ship CSAV Tyndall, once tied to Zodiac Maritime, suffered an unexplained explosion on board while in the northern Indian Ocean, according to the U.S. Maritime Administration. In this photo provided by the U.S. Navy, sailors assigned to an explosive ordnance unit board an MH-60S Seahawk helicopter on the flight deck of aircraft carrier USS Ronald Reagan to head to an oil tanker that was attacked off the coast of Oman in the Arabian Sea on Friday, July 30, 2021. An attack on an oil tanker linked to an Israeli billionaire killed two crew members off Oman in the Arabian Sea, authorities said Friday, marking the first fatalities after years of assaults targeting shipping in the region. (Quinton A. Lee/U.S. Navy)