Is Jill Biden OK? FLOTUS mocked for leaning on crutch on right while being injured on left foot! WASHINGTON: Jill Biden was seen walking with a crutch on Friday, August 13, after undergoing foot surgery following a Hawaii beach injury as she and President Joe Biden were seen boarding a plane to visit Camp David after a short break in their hometown of Delaware.

The first lady donned a mini dress, with a supportive boot on her left foot, as she walked with the help of a crutch. She also used the crutch to hoist herself onto the aircraft on Friday, August 13. The POTUS, who was wearing a pair of jeans, polo shirt, and baseball cap, and a face covering, was seen giving his wife a helping hand as the first couple boarded their flight. Jill was also wearing a face mask. Neither the president nor the first lady spoke to reporters as they got onto the aircraft.

Serial prankster Jill Biden at it again: FLOTUS dresses up as airhostess and serves ice cream on plane

How did Jill Biden injure her foot?

The FLOTUS underwent a medical procedure on her left foot last month in order to remove debris from a puncture that she suffered during a beach walk. The 40-year-old was said to have "stepped on an object on the beach" while visiting Hawaii for an official event. Michael LaRosa, press secretary to the First Lady, said at the time of her surgery: "FLOTUS underwent a successful procedure on her left foot to flush out debris from a puncture wound. After inspection of the wound by medical staff, it is unclear what object caused the puncture. The wound is now clean, free of infection and it is anticipated that it will heal nicely. She and the President will depart Walter Reed en route to the White House shortly."

After pictures of Jill with a single crutch went viral on Twitter, CNN White House correspondent Kate Bennett wrote, "@FLOTUS photographed with her boot and crutch on her way to Camp David today. Biden had a procedure on her foot following an injury she sustained walking on the beach in Hawaii last month. I am told the boot and crutches are standard recovery procedure." Washington Post reporter Jada Yuan tweeted, @FLOTUS pictured today w/ a boot on foot & one crutch. To which I have to say: DON'T DO IT! NEVER USE ONE CRUTCH! I did when I broke my foot & wound up with frozen shoulder for 2 years. It's common in women over 40 & hurts & comes back & costs so much $$.

. @FLOTUS photographed with her boot and crutch on her way to Camp David today. Biden had a procedure on her foot following an injury she sustained walking on the beach in Hawaii last month. I am told the boot and crutches are standard recovery procedure. pic.twitter.com/LhJK6qENIy 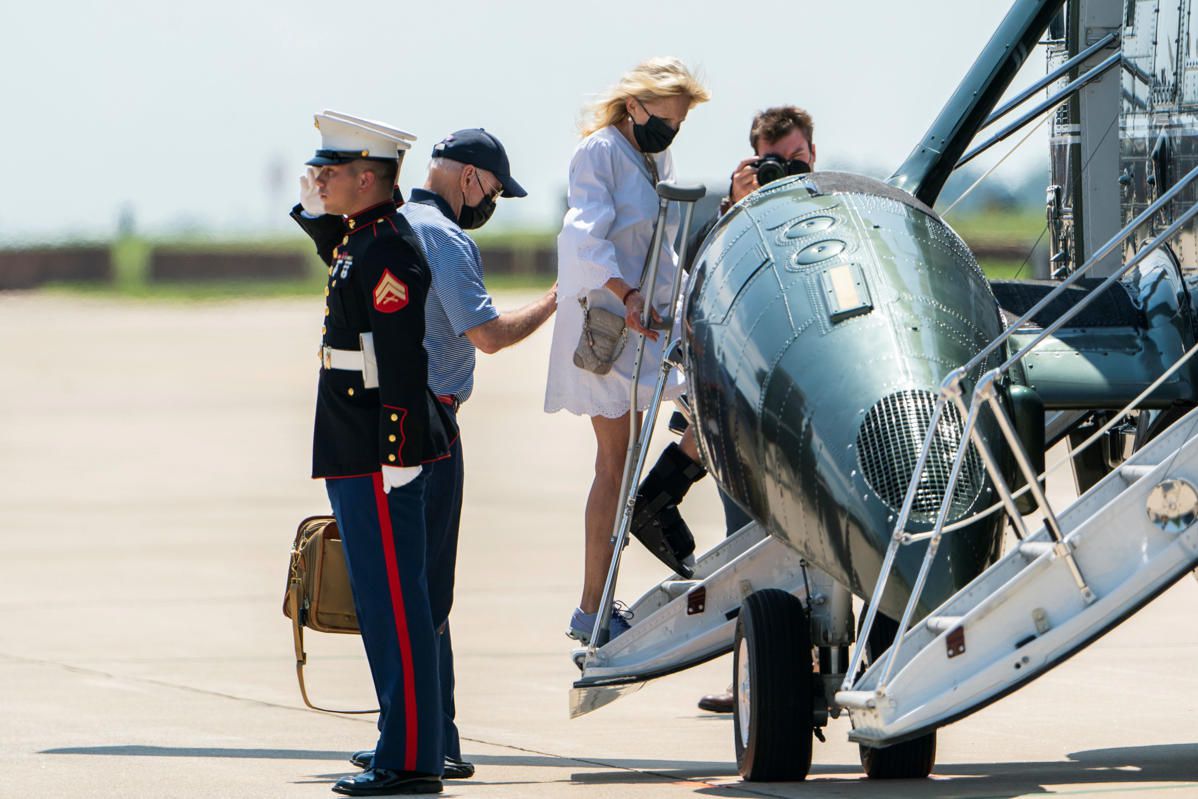